Bangalore’s World-Famous Semi-Deluxe Writing Program is an 8-weekend long creative writing course that features leading Bangalore writers as faculty. Taught in the form of lectures, workshops, assignments, discussions and a whole lot of writing. The program is brought to you by course directors and acclaimed writers Anjum Hasan, Eshwar Sundaresan and Zac O’ Yeah in association with Shoonya.

APPLICATIONS FOR THE NEXT EDITION OF THE PROGRAM WILL BE INVITED TOWARDS THE END OF 2020.

What does writing mean to you?

To write is to experience the world anew, even as the world moulds you through writing. Writing sharpens your faculties, sensitises you to language, and enables you to find a voice. As a writer, you could tell your own story or those of others, create narratives or report on those unfolding around you, find new ways to communicate your ideas and tune in to other styles of thinking. Writing could also bring you in contact with fellow writers, give you an income, enable you to travel, open out a career. Or it could just enhance your interest in literature.

Bangalore’s World-Famous Semi-Deluxe Writing Program has been designed with all these possibilities in mind. This 8-weekend program will make you an aware and innovative writer in either fiction or nonfiction. Or both!

So what does the program entail?

The program will be held over eight weekends. You will spend your mornings in a classroom learning skills, understanding craft, and trying your hand at a range of genres, while using your spare time to complete assignments that will be reviewed by the faculty on an individual basis. This hands-on and interactive experience promises to be an engaging way to challenge yourself to do something new. By the end of the workshop you will be writing courageously and skilfully.

Faculty include leading practitioners in their respective fields, ranging from fiction to poetry, thriller writing to travelogues, children’s writing to long form journalism, to name a few.

Benefits of the program: 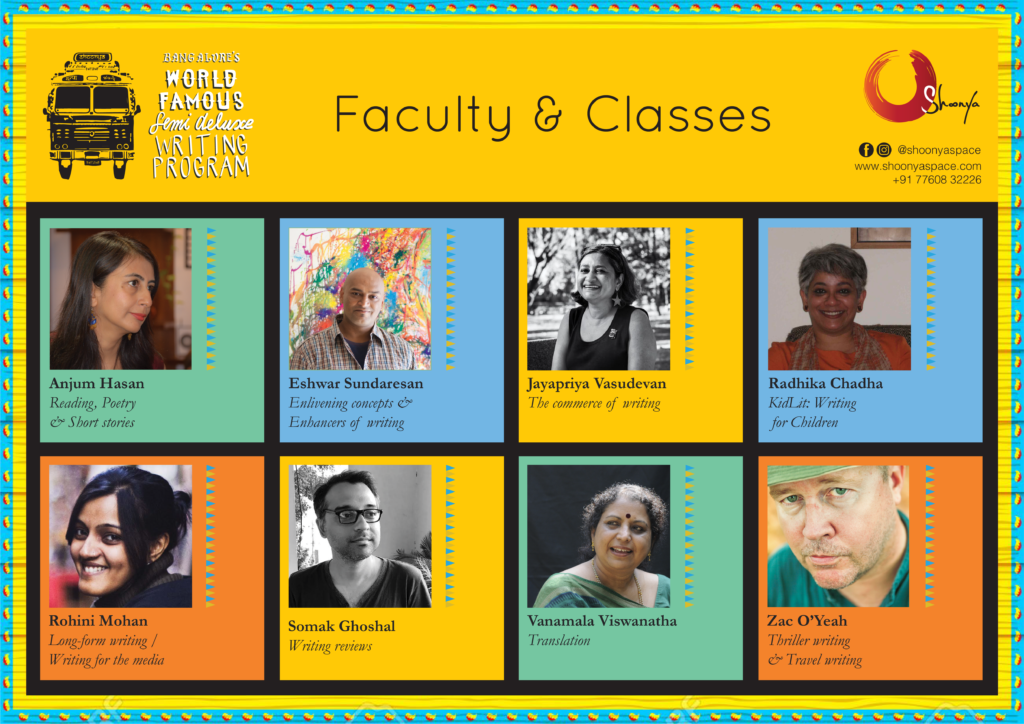 Conceptualised and led by

Anjum Hasan is the author of the novels The Cosmopolitans, Neti, Neti and Lunatic in My Head, and the short story collections A Day in the Life and Difficult Pleasures. She has also published a book of poems called Street on the Hill. Her books have been nominated for various awards including the Man Asian Literary Prize, the DSC Prize for South Asian Literature, the Hindu Best Fiction Award, the Crossword Fiction Award, and the Atta Galatta Book Prize. She has been Visiting Professor of Creative Writing at Ashoka University and a Charles Wallace Writer-in-Residence at the University of Canterbury. Her short stories, essays and poems are widely published in India and abroad.

Eshwar Sundaresan is the author of Behind the Silicon Mask, Bangalored: the Expat Story, God Save the Toddy, Age-old Tales and Wiser After. As a freelance journalist, Eshwar has contributed to media agencies in India, Pakistan and Singapore. Since quitting the IT industry in 2003, he has found parallel vocations as a trainer and counsellor; thus, he adds value to classrooms and individuals respectively. He has written a restaurant menu, a full-length novel and everything in between. He thus understands that the written word has infinite uses and good writers come in infinite shades. When he mentors aspiring writers, he helps them discover their uniqueness. As a part of the Faith Foundation, Eshwar has helped spread awareness on child sex abuse and sexuality issues to around 55,000 children. He is awaiting the release of his first film while working on his next book, A handbook for the Indian freelancer.

Zac O’Yeah is a Swedish detective novelist and author of the Majestic Trilogy, which is set in his Indian hometown Bengaluru. He has published 15 books including several fiction and nonfiction bestsellers. His Gandhi biography Mahatma! was ranked as the best nonfiction book in Sweden in 2008. His travel writings have appeared in magazines such as National Geographic Traveller, Outlook Traveller, RES and Vagabond, and also been included in many anthologies. All in all, he has written for more than 75 different publications and he is currently a columnist with the BusinessLine newspaper. His writings have been translated into German, French, Norwegian, Danish, Finnish, Russian, Chinese, Kannada, Marathi, Tamil and Hindi. He is a founder-director of Bangalore’s World-Famous Semi-Deluxe Writing Programme, the first semi-professional writing school in India. His most recent books include the novel Tropical Detective and the travelogue A Walk Through Barygaza and the children’s book The Mystery of the Cyber Friend. He also composes music with the pop group The Ändå.