If you are a student/professional artist, you are eligible to attend the workshop for Rs 700. Please share student ID scan/your CV with us at info@shoonyaspace.com 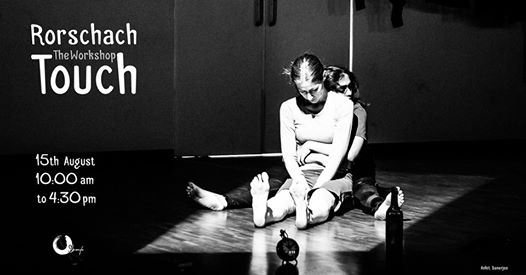 Rorschach Touch is about perception, intimacy, and intentionality, all presented and explored around the canvas of touch and movement. The piece has been under process since 2014 and was recently shown in its current avatar in Bangalore with an 8-member cast (comprising of dancers), produced by the Goethe-Institut Bangalore and supported by Shoonya – Centre for Art and Somatic Practices.

The choreographer, Diya Naidu, is interested in developing a unique methodology for this work, and so has initiated a series of workshops to:
> Share the process and tools used to create the performance
> Share the very specific somatic practices and awareness-based regime, which the dancers had to undergo to execute this piece
> Ask questions and hold discussions around the ideas that the piece explores, and those that the participants of the workshop are curious about
> To share the choreographic and compositional methods, resulting in a kind of re-creation of the work (in a small way) for the participants, that will then be shown to an audience

The idea of the workshop is also to allow the viewers of Rorschach Touch to access the work more intimately by actually being in the piece. This is an effort in that direction. Diya hopes to one day recast this work with a mixed cast of dancers/performers and non-performers and is hoping these workshops will allow her to explore this idea.

Diya Naidu is an independent dancer and choreographer from Bangalore. Her works are inspired by varied themes such as explorations of gender, old age, existential angst in urban chaos, and Bardo in Tibetan Buddhist philosophy among others.

In 2015 she was a resident at the Facets choreographic residency of the Attakkalari Biennial and made her piece Today Don’t Insist on Leaving. The same year she was Pro Helvetia‘s artist-in-residence in Zurich where she created Red Dress Waali Ladki. In 2016, she developed the Hands and Face Project, which won a Jury Award at The Prakriti Excellence In Contemporary Dance Awards. She was also a grantee at Gender Bender, under which she developed Rorschach Touch. In 2011 she was the joint awardee of Robert Bosch, Bangalore‘s Young Choreographer Award under which she created her first solo Nadir. In 2012 she created Bardo Beings, also a finalist at PECDA and performed at Attakkalari Biennial’s Platform 15, among other events.

She was a member of the Attakkalari Repertory Company for many years, after obtaining a Diploma in Movement Arts from the same. She has also worked with The Danceworx, New Delhi and Rythmosaic, Kolkata.

At present, she has choreographed and is performing in The Company Theatre‘s – Khwaab Sa, directed by Atul Kumar.

She teaches at LshVa and Shoonya art spaces, Bangalore. She is interested in working with members of the community and to that end is in the process of developing a module that imparts tools for creative expression, mindfulness, collaborative activities, conceptual thinking, body awareness and more, to enrich their life experience and well being.