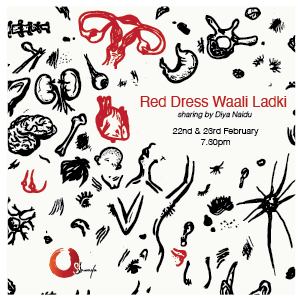 Red Dress Waali Ladki, was born out of the Diya Naidu’s response to the brutal crimes against women in India. Through the research and introspection that went into making the work, she decided to talk about the layered, subtle experience of the woman, who is seemingly liberated but constantly carrying fear in her body. Through the performance, she asks: Where does this patriarchal penetration locate itself? If ‘her’ rape is ‘my’ rape, can my bliss be her’s too? Can men be invited as equals into this?

The work is an ongoing (failing) research. Not scientific per se or even just physical; not even restricted to the laboratory (in this case studio). It will probably never stop. But one can hope. It began in 2014 and now is a non-performance of itself. Those who witness it, will in some way carry it within them.