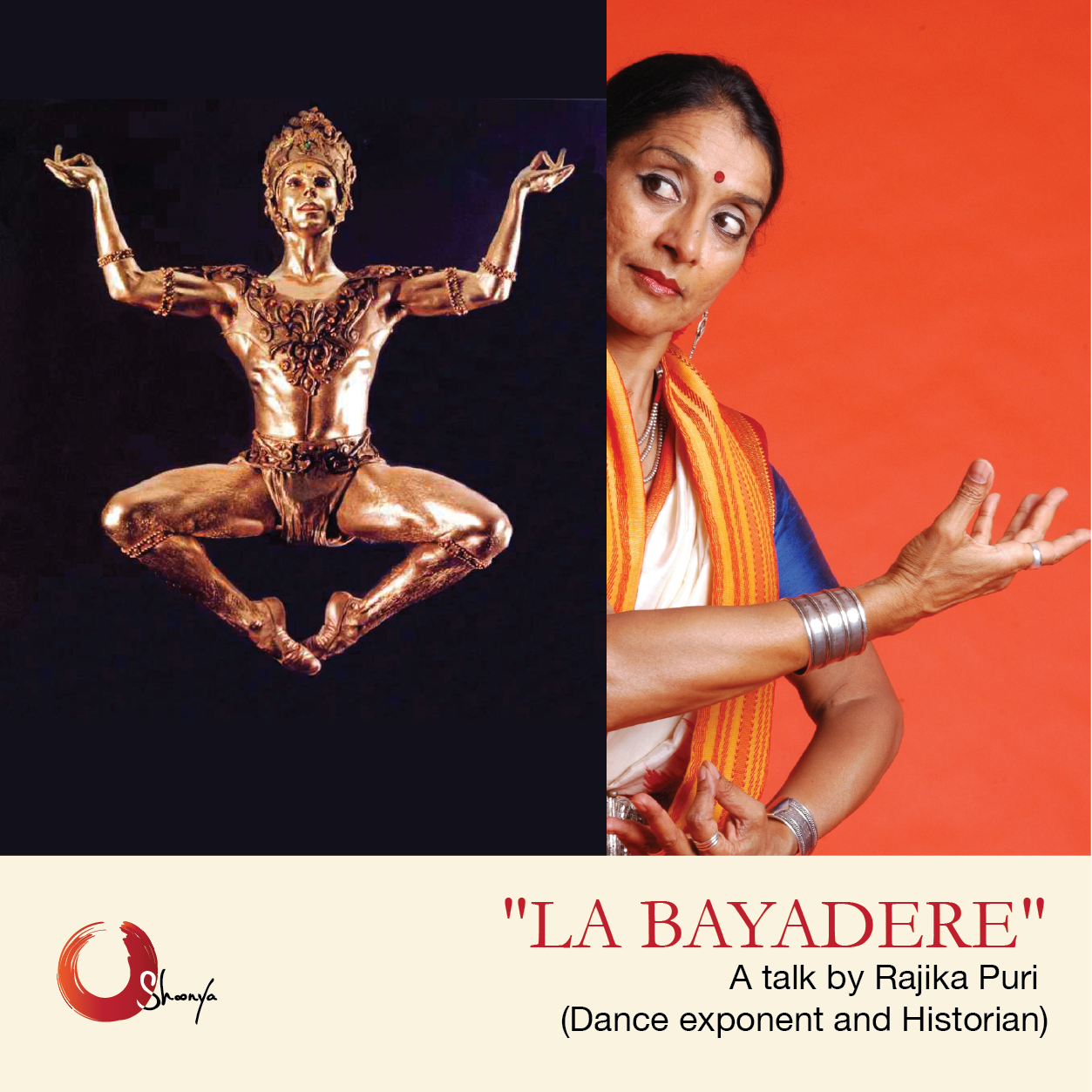 Rajika Puri on the ballet La Bayadere ‘The Temple Dancer’
A slide presentation with video and demonstration of ballet mime.
Followed by VARNAM, a bharatanatyam solo by Asokavadhani (student of Raadha Kalpa).

Dancer-storyteller, Rajika Puri, who was invited as coach for the mime-sections in a recent production of the ballet La Bayadere (‘the temple dancer’) in Berlin, presents an overview of the ballet originally choreographed in 1877 – its history and the travelers’ legends it arose from – in a slide lecture presentation with photographs and video footage of that production – in performance and rehearsal.

The creator of this iconic work was the legendary choreographer MARIUS PETIPA, whose birth bicentennial is celebrated this year. Considered the oriinator of ‘classical ballet’, La Bayadere introduced the very idea of an ‘all white’ act – such as is seen in the ballets Swan Lake, Giselle, Les Sylphides – which took the world by storm.

Petipa is also known for telling his stories through long sections of mime. The new Berlin version is a brilliantly reimagined reconstruction – from notation and extensive notes made by Petipa in 1900 – by the star choreographer of ballet today: Alexei Ratmansky. Rajika, who was invited to Berlin as coach for the mime-sections, discusses – and demonstrates – the gestures of ballet mime and compares it to the use of hastabhinaya in Bharatanatyam.”

RAJIKA PURI – an exponent of Bharatanatyam and Odissi – is especially known both for a form of danced storytelling she has developed (‘Sutradhari Natyam’) and for her onstage pre-performance slide lectures that make connections between a range of aspects of Indian dance – music, theatre, cultural contexts and so on. She is often invited as Narrator – ‘Sutradhar’ for dance festivals in New York, many of which she herself co-curates and, even, co-presents.

In 2016 she performed at LshVa a slide lecture in which she sang and danced the texts of miniature paintings on Ragamala, Dashaavatara, Rasikapriya, and Gita Govinda. A rasika of ballet since she was 5 yrs old, she has been lucky enough to see some of the great ballet productions of the last 50 years and continues to do so as member of the NY Dance and Performance Awards Nominations’ (‘The Bessies’) committee.